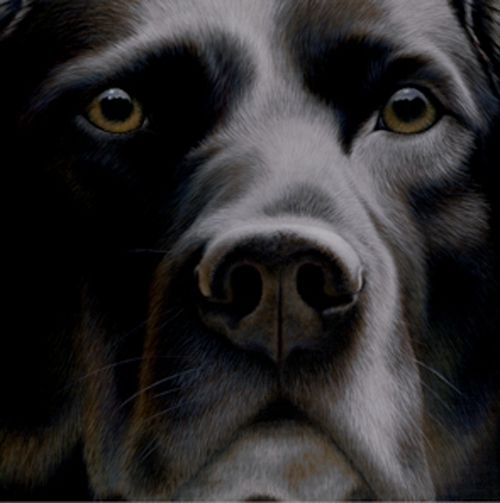 One of a Companion set... Labrador and Spaniel
A Word from the ARTIST
It's a little difficult to categorise these two new images. To be frank, they were produced originally as promotional works for portraits. To that end, I exhibited the Springer at the CLA Game Fair this year. I must confess, I was overwhelmed by the response to the piece - not only as a portrait, but also its potential as a limited edition print. I then painted the Lab as a companion piece and exhibited this work beside the Springer at the Midland Game Fair in September - with an equally positive response.

As you can see, the images are all face. Not only are they looking directly at the viewer - which itself, I believe, gives them appeal - they are painted a good deal larger than life. Hence the title. I feel this gives them an impact far and beyond life-sized.

The originals are large, 24 inches x 24 inches, and painted on box canvas. When contemplating how to reproduce them, I initially considered printing them on canvas. However, after much deliberation, I decided to stick to what I then knew and published them as paper only. Nevertheless, since their release, I have started producing canvas prints and so they are now available in both formats
Category:Dogs